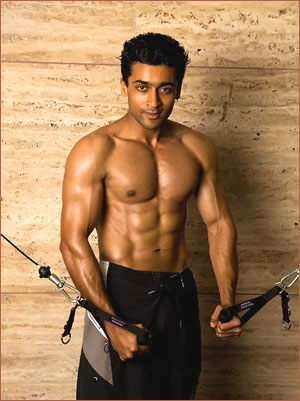 Tamil actor Surya's transformation from a lean hero to a macho man started with Gowtham Menon's Kaakha Kaakha. After the tough yet romantic police officer act, he became a darling of the girls in Tamil Nadu.

Ghajini's stupendous success reinforced his star image. But he is one actor, who doesn't stick to conventional masala films and loves to experiments with his roles.

If he cropped his hair and became trim to be the police officer in Kaakha Kaakha, he developed a bulky body and shaved his head to play a mad convict in Ghajini.

Now, he has worked even harder and got himself six-pack abs for Gowtham Menon's new film Vaaranam Aaiyiram, where his character ages from his teenage days until his 70s.

Eight months of rigourous training has made Surya's fab abs the envy of all Tamil actors!