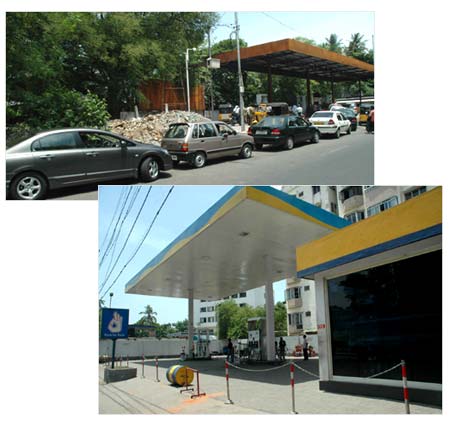 If Monday saw long queues in front of most of the petrol bunks in the city of Chennai, Tuesday saw most of them closed with the sign, 'No petrol. No diesel.'

It was a nightmarish day for all the motorists in the city with long queues at almost all the bunks blocking the traffic and making the already chaotic traffic of Chennai worse.

Tuesday early morning also saw long queues in front of many of the petrol bunks but it slowly disappeared. There was less chaos as most of the bunks had run dry.

A press release from Indian Oil Corporation [Get Quote] said that the supply problem was temporary and that it was due to the delayed receipt of diesel supplies through coastal tankers by Bharat Petroleum Corporation Ltd [Get Quote]. This had depleted the stocks of diesel with the company. It also resulted in the diversion of BPCL's customers to the outlets of IOC and HPC.

Though Tuesday is comparatively calm, petrol bunks fear that Wednesday will be manic.

Petrol pumps in Chennai ran dry leading to tremendous chaos in the city as long queues were seen everywhere as anxious people sought to fill thier vehciles' tanks up.  | Photograph: Sreeram Selvaraj