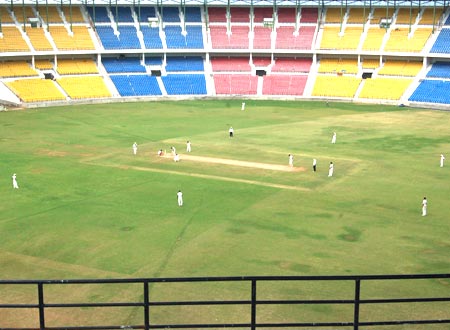 Nagpur will have a new cricket home when the Vidarbha Cricket Association unveils its brand new stadium for the fourth India-Australia Test, beginning on Thursday.

VCA's old stadium at Civil Lines, in the heart of the city, will give way to a posh new stadium at Jamtha, situated 16 kms from the city on the Nagpur-Hyderabad highway, to host international matches.

The old stadium housed a lot of shops in its exterior and was extremely short of space for any new development. But the new stadium is spread over 33 acres of land as against the seven of the old, giving it ample space to add new and better facilities.

The stadium will house 31 corporate boxes in the south stand and 10 in the north. All boxes will be air-conditioned and have 15 seats each. The south end will also have the VIP boxes, press box and players' pavilions.

"The new stadium will have modern infrastructure and will be very convenient for the spectators. The players will also find it very comfortable since the dressing rooms are huge, with a mini-gym each for both teams. The sitting capacity is 45,000 which enables us to accommodate more spectators," an official said.

The dressing rooms are situated on the first floor and comprise a sit-out area, a mini-gymnasium with all modern equipment, a medical room and lunch room. There is a staircase that leads the players straight into the field of play.

The project, built by eminent design and construction company, M/S Shapoorji Pallonji, Mumbai, was set a deadline of August 2007, but the constant change in design meant that the period had to be extended by a year.

The total cost of the stadium and the club house is estimated to be around Rs 75 crore.

Despite being far from the city, the organisers are confident that the stadium will see a huge gathering on all the five days.

The red carpet is ready to roll out and everyone is hoping that the first show turns out to be a blockbuster.